By Accident or Design 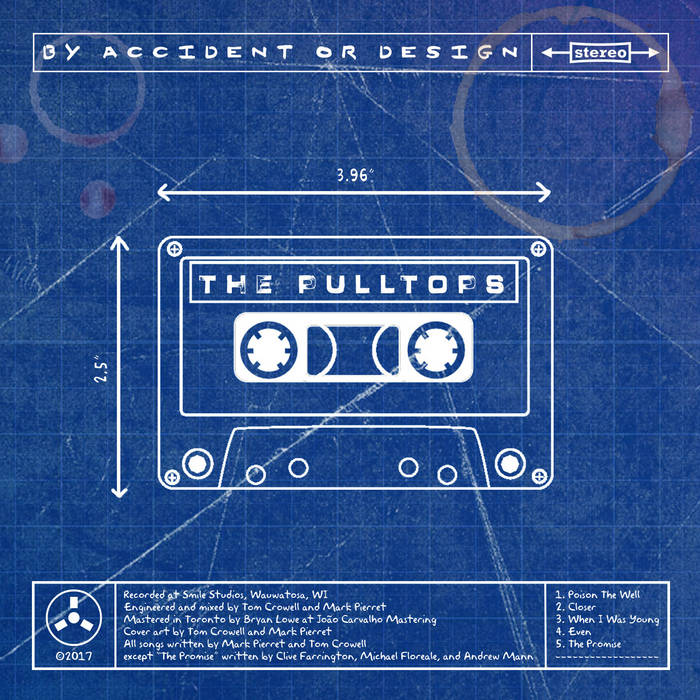 The Pulltops are a power trio turned dynamic duo with a singing drummer celebrating their 15th anniversary. Their music is best described as energetic Power Pop meets Album Rock. They were formed in Milwaukee in 2002 with the release of their first and more up-beat Power-Pop focused CD, “8-Track”. They have since added in Classic Rock and Album Rock elements along with instrumental experimentation resulting in a mix of hooks and moody rock that has culminated in the release of their new EP, “By Accident or Design".

While live bassist Steve Kerwin lends a hand on two of the tracks on this new studio release, the remainder of the instruments and production fall squarely on the shoulders of long-time musical partners Mark Pierret and Tom Crowell. Their 2017 EP shows growth in the diversity of their writing and production style, all the while keeping the core elements of Power Pop hooks in tow.

The opening track, “Poison The Well”, brings back the 60’s Soul influence found on their first release. The addition of horns and organ, along with the four-on-the-floor rhythm section give it that nostalgic feel, yet they still keep the energy of modern rock driving the song along.

“Closer” leans more toward their album rock influence, with atmospheric delay-textured guitars that build and then fall into delicate string breaks. It’s a powerful landscape with contrasting quiet moments.

“When I Was Young” is the straight-forward rock track on the album. Powerful guitars, alternating vocal leads, and a searing guitar solo over a power-house rhythm section adds weight to the EP.

By contrast, “Even” sets a softer tone. Simple, clean and repetitive guitars lay down a foundation for a more delicate vocal delivery. The song then opens up into a more theatrical production with timpani, strings, and orchestrated guitar work ending the song in a sonic climax.

The EP closes with an updated arrangement of the When In Rome 80’s classic, “The Promise”. Synth is replaced with guitar textures, and the song is given a drive that is characteristic of The Pulltops sound.

There are a lot of musical ideas condensed into this well produced 18 minute package that will leave any listener satisfied.